Who Listens To Commercials On Las Vegas Radio? 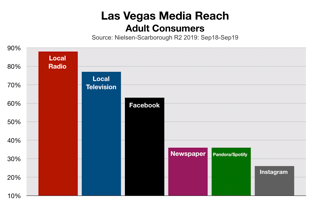 Every week, 1,502,898 adult consumers tune-in to a Las Vegas radio station. That is way more than are reached by other media, including local television, newspaper, social media, or streaming audio sites like Pandora and Spotify.

A more significant number for thousands of Clark County small business owners who advertise on Las Vegas radio is how many of these listeners stick around when their commercials come on.

A lot has changed since 2011. Nevada consumers have many more media options and can instantly connect to each  with a button-push, mouse-click, screen-tap, or voice command. With all of these choices, do radio audiences still stay tuned during commercial breaks?

The conclusion of the recent study affirms the decision for local small business owners who choose to market their goods and services on Las Vegas radio.